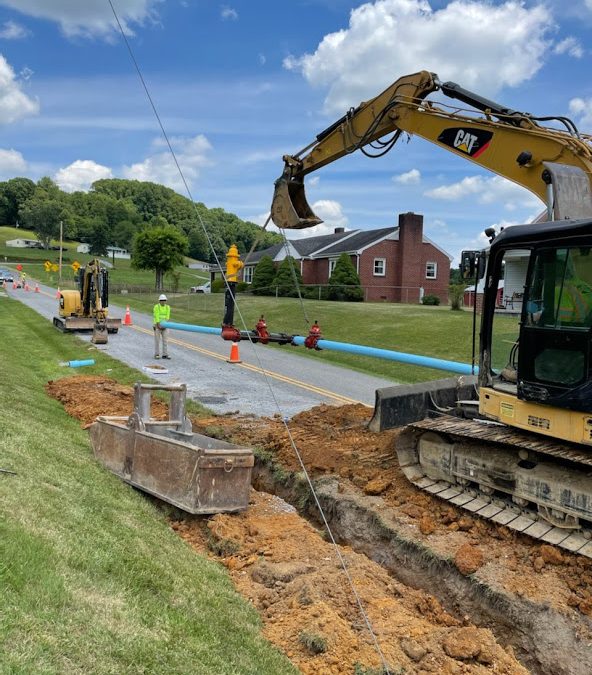 Several years ago, WCSA began a massive undertaking that will directly impact 40% of its water customers. When completed, the Galvanized Line Replacement Project will improve pressure challenges for approximately 8,000 existing connections, eliminate many leak issues, add more fire hydrants to the system, and provide more reliable service. The project will also indirectly impact many other customers throughout Washington County.

Before the project got underway, nearly one quarter of WCSA’s distribution system — 200 miles — consisted of small, galvanized steel pipe. Because most of this pipe was two inches or smaller in diameter, it couldn’t provide adequate flow or pressure, nor was fire flow possible. In addition, pipes’ tendency to corrode from the outside has resulted in frequent leaks and water quality complaints.

“The majority of all galvanized line in WCSA’s distribution system is between twenty and fifty years old, although some dates as far back as the 1950s,” says WCSA General Manager Robbie Cornett. “This type of pipe accounts for the majority of all repaired water leaks in WCSA’s system, with an average total annual repair cost of $270,000. It has been the number one contributor to customer complaints related to both water quality and hydraulic deficiencies. The Galvanized Line Replacement Project will help alleviate these issues.”

The approximately $31 million project is supported by low-interest loans from USDA Rural Development, along with a $1 million grant.

The project was divided into three phases. Completed in early 2013, Phase 1 incorporated nearly 212,000 linear feet of new ductile iron and PVC, improving service for nearly 2,700 connections in the town of Abingdon, the town of Glade Spring, the Abingdon Elementary / Route 19 area, and the Lowry Hills area.

In the fall of 2015, construction on Phase 2 began, which was split into five divisions. The first four divisions were completed by spring of 2016, and the fifth division began in June 2016. When the final division of Phase 2 was completed in March 2017, nearly 242,000 linear feet of new piping had been installed, improving service for approximately 1,850 connections around Benhams and Reedy Creek; along Wyndale Road and at the northern end of Lee Highway; at Abingdon Elementary, Prices Bridge, DeBusk Mill and Cedar Creek; in areas of Westwood, Emory, Taylors Valley and Fishers Hollow; and in Stonegate Subdivision.

The third and final phase of the project, which began in November 2020, will improve service for approximately 1,450 connections. The project is widespread across Washington County and consists of seven divisions. Construction is expected to be completed in the spring of 2022.

Divisions 1 & 1A of Phase 3 encompass sections between the Rivermont and Damascus areas. Divisions 2, 2A, and 2B include parts around South Holston Lake, Old Saltworks Road, outlying areas of the town of Abingdon, Larwood Acres and Clayman Valley. Divisions 3 and 3A incorporate sections around Smyth Chapel / Tobias, Greenway Creek / Stonybrook, and outlying areas around the town of Glade Spring.

The replacement of WCSA’s galvanized piping has been accompanied by a great deal of planning for the future. Lines are sized to meet the needs of customers 40 or more years down the road. In addition, the new lines being installed allow for the addition of 105 new fire hydrants, providing many residents with fire protection for the very first time.